The Airport took delivery of its first new fire truck in more than 19 years, for aircraft rescue and firefighting operations, in October.  The Oshkosh Striker is at the top of its class – and 100% paid for by the Federal Aviation Administration (FAA). 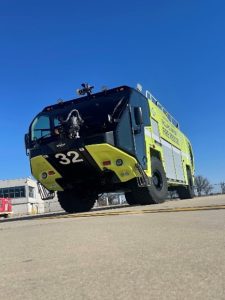 As Car and Driver writes, “Think of the Striker as the Porsche 959 of firetrucks. The Striker offers a 30-degree angle of approach and departure, and it can climb a 50-percent grade. It’s designed to flatten the standard chain-link fences that surround U.S. airports. It’s 10 feet wide-with a monster track that helps keep it upright even when it’s leaning 30 degrees to port or starboard.”

“By firetruck standards, it’s also quick. The FAA requires that ARFF trucks accelerate to 50 mph in 35.0 seconds and that, from the moment the alarm sounds, the truck is capable of reaching the midpoint of the most distant runway in no more than three minutes.”

Willard Airport will now have two Strikers within its inventory, one primary vehicle and one reserve vehicle, ready 24-hours a day, 365 days a year.  The Striker is built by the Oshkosh Corporation in Appleton, Wisconsin. Willard Airport maintains a fully staffed, specially trained Fire Department, which operates 24/7/365.