Leveraging Aid to Bridge the Pandemic

When Willard Airport’s passengers collapsed as the pandemic took hold, the Airport quickly worked with federal agencies to replace lost revenue, and keep everyone working on the field employed.  Unlike other central Illinois airports, Willard gets no local tax revenue – so the pandemic created a challenge deeper for Willard than for most other airports.  With the Airport’s quick action, the community is well positioned for air service recovery, and even growth.

It’s no surprise that the pandemic has been challenging for all airports around the world.  Willard Airport is especially susceptible to pandemic impacts because such a high proportion of passengers are traveling for business.  Many of the Airport’s most frequent travelers have been grounded since the pandemic began.  That puts a huge dent in the Airport’s budget.

That means Willard has to run like a business.  The Airport has to be fully supported by incoming revenue, from things like landing fees, airline rent, terminal concessions, rental car revenue, and, yes, parking fees.  When passengers dropped by more than 50%, so did the Airport’s revenue. 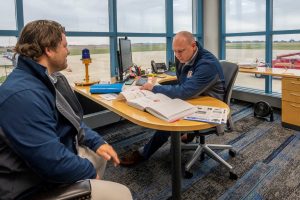 Thankfully, Willard received a total of $5.14 million in COVID relief funds.  Willard qualified for grants through various programs, including CARES, CRRSAA, and ARPA. The vast majority of the money is being spent directly on staff payroll.  Our passengers are still down about 40% from pre-pandemic levels, and so is our revenue.  Grant funding ensures we can keep our staff employed, and the Airport ready for traffic to rebound.

We’re also working to develop new sources of funding to better connect Champaign-Urbana to the world.  We’ll soon be applying for a Small Community Air Service Development Grant from the Department of Transportation.  The money can be used to offer airline incentives for expanded service, as we work to emerge from the pandemic.

Airports all over the country leverage these grants for expanded air service.  More than 200 new routes have been supported by the grants.  And the Airport hopes to add its name to the list of airports with better connectivity because of enhanced airline incentives.

Willard’s primary target for new air service is Washington, DC.  The market generated more than 50 passengers each day that traveled to DC before the pandemic.  But Willard is competing with many other airports for that coveted service.  A grant will help to set the community apart from others that are recruiting the same aircraft and pilot resources.

In addition to DC, the Airport continues to meet with airlines to talk about service in other high priority markets such as Florida, Las Vegas, and hubs to the west.